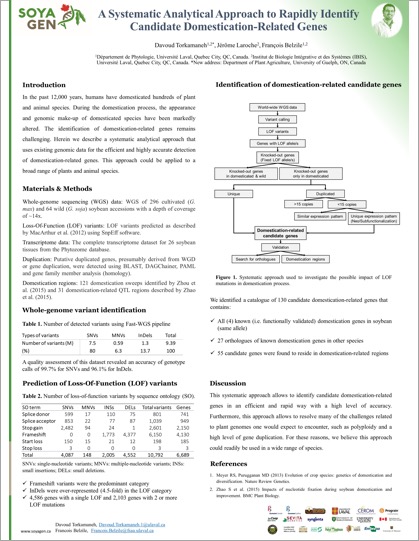 Domestication is an important key co-evolutionary process through which humans have extensively altered the genomic make-up and appearance of both plants and animals. The identification of domestication-related genes remains very arduous. In this study, we present a systematic analytical approach that harnesses two recent advances in genomics, whole-genome sequencing and prediction of loss-of-function (LOF) mutations, to greatly facilitate the assembly of an exhaustive catalogue of domestication-related candidate genes. Using whole-genome sequencing data for 296 cultivated (G. max) and 64 wild soybean accessions, we identified 10,792 LOF variants, and 193 genes that are uniquely fixed for the LOF allele in domesticated soybeans. Existing soybean transcriptomic data led us to overcome analytical challenges associated with whole-genome duplications and to identify neo- or sub-functionalized genes. This systematic approach allowed us to identify 130 candidate domestication-related genes in an efficient and rapid way. This catalogue contains all of the previously well-characterized domestication genes in soybean, as well as some orthologues from other domesticated crop species. In addition, it comprises many additional novel candidate domestication genes. Overall, this collection of candidate domestication-related genes in soybean is almost twice as large as the sum of all previously reported candidate genes in all other crops. We believe this systematic approach could readily be used in wide range of species.