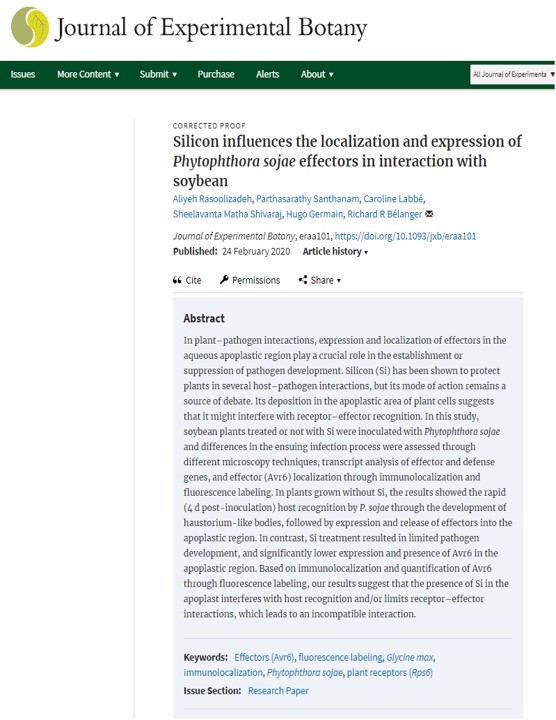 In plant–pathogen interactions, expression and localization of effectors in the aqueous apoplastic region play a crucial role in the establishment or suppression of pathogen development. Silicon (Si) has been shown to protect plants in several host–pathogen interactions, but its mode of action remains a source of debate. Its deposition in the apoplastic area of plant cells suggests that it might interfere with receptor–effector recognition. In this study, soybean plants treated or not with Si were inoculated with Phytophthora sojae and differences in the ensuing infection process were assessed through different microscopy techniques, transcript analysis of effector and defense genes, and effector (Avr6) localization through immunolocalization and fluorescence labeling. In plants grown without Si, the results showed the rapid (4 d post-inoculation) host recognition by P. sojae through the development of haustorium-like bodies, followed by expression and release of effectors into the apoplastic region. In contrast, Si treatment resulted in limited pathogen development, and significantly lower expression and presence of Avr6 in the apoplastic region. Based on immunolocalization and quantification of Avr6 through fluorescence labeling, our results suggest that the presence of Si in the apoplast interferes with host recognition and/or limits receptor–effector interactions, which leads to an incompatible interaction.